I recently made a trip down to Durban and had some time on a Saturday morning to get out to the Botanic Gardens, one of my favourite places to visit when I am in Durban (see the previous post on the other places to see when in Durban: I’m coming home…part 2 of 2).  It was a clear, sunny morning, creating light that lend itself perfectly to shooting, unlike most of my previous visits that were mostly cloudy and on one occasion raining.  The large patches of shade on the small pond created by the trees that surround it and shooting indoors in the orchid nursery allowed me to try my hand at some low key shots of the birds on the pond and some of the orchids, resulting in some of the pictures in this post.  I got a number of questions on how I achieved these dramatic shots and so I will try to explain some of the technique behind the photos.

What is Low Key photography?

When the concept was explained to me, it was using the technical photography terms that I must admit, I did not immediately understand but once I saw examples I made a bit of association with the photography style.  In my own words I would explain low key photography as the use of darkness,or the lack of light in a photograph to place emphasis on the subject matter or specific parts of the subject matter, particularly effective when shooting black and white.  The results can be rather dramatic when you get it right.  The opposite to low key photography is high key photography, where the subject matter and the rest of the photo is flooded with light, sometimes leading to the white areas to be close to blown out making the resulting picture light, airy and less dramatic.  High key also works well in black and white. The technical explanation I was given was that low key photography is when your histogram is predominantly to the left.  Conversely, if you are shooting to the right of your histogram, the resulting photograph is considered high key.

Shooting low key is often achieved in studio by using a dark backdrop and then getting the lighting just right or using a large natural light source such as a window while keeping the rest of the studio/room dark.  I have seen how it is done in a studio but have never attempted it myself.   Shooting these types of pictures outdoors on the other hand using natural lighting and subjects takes getting a combination of a few elements correct and as with most nature photography, luck and timing.

On my trip to the botanical gardens I used my Canon 7D mark ii with my favourite lens, the 300mm F4L IS on the front with the 1.4x extender attached effectively making it a 420mm F5.6L IS as I went out to try to get some bird photos.  I found that the lens also works better for some of the flower photographs as it allows a greater reach than my 100mm macro lens would.  At the Durban botanic gardens this comes in handy with the water lilies as well as the orchids being a bit harder to reach.  For some stability when shooting with the telephoto lens I have a Manfroto monopod that I combine with a Jogo Gimbal head that I find generally works quite well, allowing me to break the shutter speed rule that would otherwise limit me to shooting at 1/(focal length) of the lens or 1/300s when using the 300mm lens.  For the lion pictures in the sample gallery I used my other favourite lens, the 70-200mm F2.8L IS with the 1.4x extender on the back.

Watch your background and the position of the sun

As I said, to achieve a low key photograph one of the first things you will need is a dark to black background that is in contrast to your subject matter.  This is achieved using a black backdrop in studio.  Using a backdrop may not be practical outdoors, shooting larger animals or birds.  I have however used a black reflector for flowers on a couple occasions when I had it on hand.  More often however, when shooting outdoors, it may be better to keep an eye on the background of the subject matter and aim to shoot with a darker background which can be manipulated darker to give the low key effect.  The two pictures below illustrate just that.  I saw this red hot poker flower next to a small pond near my sister’s complex in Cape Town.  Crouching a little bit to take the shot meant the grass of the opposite bank of the pond resulted in a bright green background (blurred by shooting with a wide aperture to give a shallow depth of field).  I then noticed the pond itself was muddy and by standing up on my toes I was able to change the angle I was shooting at and get a much darker background to the flower even though the flower itself looks very much the same.

Ideally, you would like to be shooting with the sun behind you whenever you can get it.  This is actually a general rule of photography to be applied when shooting most subject matter.  However it is also one you can break every now and again to get different effects such as silhouettes or lens flares.  When shooting a subject in deep shadow to achieve a dark background, the sun may actually be high or behind your subject.  Sometimes you may get lucky in this situation when shooting on a body of water as the water may act as a reflector into the darker shadows.  The trick will be to move around for the best combination of subject lighting and background. Admittedly sometimes I get it right by luck still…

I have found that choosing a lighter coloured subject matter that will offer a greater contrast to the dark background works well.  So whites, bright reds, yellows and light greens and light blues.  With many of the photos also working well in black and white, the choice of a lighter subject matter also makes it stand out from the black background better.  However, that being said, I have seen examples of dark subjects lit from the front that then fade away into the darkness that surrounds them giving an altogether different feel to the photo.  Marina Cano has some excellent examples of this with animal photos she has taken at here local nature preserve in Spain.

I will use the shot of a Bromeliad flower below to illustrate the process I use when attempting to get low key nature and flower photography.

The Bromeliad was in the orchid house at the Durban Botanic gardens.  There was low lighting because the orchid house has a semi-transparent roof.  I had been shooting with my camera on my monopod, but a well positioned handrail in the orchid house meant I had to shoot hand held.  I bumped up the ISO setting to 1000 to allow a hand held shot at 1/200s.  While the exposure on the photo is good, it is not balanced, with the shot under exposed a little (to the left of the histogram).

2.  Initial corrections to Straight Out Of Camera (SOOC) shot

On opening the image, there are a few things that need to be corrected immediately.  The image needs to be rotated counter clockwise to make it portrait. The auto white balance makes the flower appear a little too yellow/green.  I turned the white balance down to 3400, and because the flower is already pink, increased the magenta in the picture, increased the saturation and then made the shadows darker and lightened the highlights.

I then sharpen and crop the image square.  The crop can be, at most times, a personal preference.  My preference for the bromeliad was square.

I use the preset strong contrast curve to achieve the high contrast image below.  The high contrast will already start making some of the darker areas of the photo even darker.  you will also notice that the dark tips of the flower stand out much more.

5.  Convert to black and white

The next step I do is to convert to black and white.

You will notice that the green background from the leaves of the plants this flower blossomed between appear grey.  There are however already some dark areas that appear to be black already (this is the desired affect).  The black and white conversion allows for adjustments along 6 colour groups.  The greens can therefore be made as dark as possible.  I also adjusted the yellows darker and the reds and magentas brighter/lighter.

Up to this point, all adjustments made were either presets or moving sliders up and down.  With practice I am able to get to this point in under 5 minutes of opening the photo.  And some would argue that at this point I could stop and still have a perfectly good image.  However the last step of the process is to get the black areas of the background as completely black as possible to get rid of the last grey “ghosts” of the green leaves.  Looking at the image above, one will notice areas of light still coming through on the background (where the green leaves were).  There are two approaches that can be used to get these areas darker, burning or painting over with a black brush.  For this image I opted to go with the black brush to carefully paint over the darker areas in a new layer.  This method has the advantage of not being a change to the base layer, protecting the original image in a way.  I took about 25 mins to go over the various nooks and crannies so it is a little time consuming but will also depend on the accuracy you want.  The final image will then look something like below.  Occasionally you might find the background will contain a brighter area that is difficult to conceal using the black brush.  My solution to this would be cloning or healing to make the area darker prior to using the brush tool to paint over.

And there you have it. I like the final effect, even though it does take some work to get.  With enough practice you will get better though and quicker as well.  You will also begin to shoot better, checking for things like the green leaves in the Bromeliad shot that you can avoid and thereby reduce the amount of post shoot editing.  Sometimes you may even shoot with no intention of actually making the picture a low key image afterwards but knowing the technique could help you transform otherwise OK pictures to something more (and sometimes unexpectedly) dramatic.

Some of my other examples of low key nature photography: 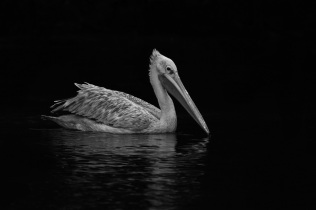 4 thoughts on “My guide to capturing low key nature photographs”