So if you read my blog a few months back on the trials and tribulations of setting up the DJI Spark you will know how excited I was for my first foray into droning and drone photography (Spark of insanity ) But almost as much as it excited me the littlest drone in the DJI line up did leave me frustrated for the 4 months or so I did own it.  Flying through a WIFI connection to the phone, the biggest bug bear I had was that the furthest out I could get it before losing signal was just over 100m at the limited height of 120m.  Limited battery life was addressed through multiple batteries and the ease of flying with the remote was actually quite impressive.  And then, in almost an ultimate act of insanity and almost to fulfill the prophecy I laid out in September, on the 30 December, the little spark flew out about 70m over the waves of Nature’s Valley and about 4m high then started to come back in reverse and decided to spit its own battery out and plummet into the knee-deep water of the Southern Indian Ocean.

I was devastated.  I had my camera on a tripod with me and was flying from the sand up the deserted beach and watched as the Spark’s power cut out and the battery fell in one direction and the drone body in another.  I ran in, abandoning the rest of camera gear half way up the beach, but I knew salt water was probably not great news! I managed to fish the drone out and then to my surprise also spotted the ejected battery and rescued that as well.  The salt water had already corroded the contact terminals and power was quickly leaking out.  Forlorn, I returned to my spot on the beach only then realising that the rest of my camera gear may not have been safe just laying there and then I immediately called insurance and logged the possible claim.  Back in Johannesburg called Outdoorphoto and was helped by one of the senior guys there, Alroy who got in contact with DJI and began the process of trying to find out what went wrong.  After a week’s investigation I was told that DJI would replace the Spark and was exuberant again!

While all this was happening DJI made the massive announcement of the Mavic Air. Fitting in between the Spark and the Mavic Pro the Air has all the capability of the Mavic Pro but fold down smaller than the Spark, which has fixed propeller arms.  The Mavic Air has fixed propellers instead and arms that fold down, making it more compact.  The camera however is the same as the Mavic Pro so the Air almost makes the Pro obsolete.  DJI will probably release a newer replacement for it soon.  Price wise the Mavic Air fits in closer to the Spark.  So after some thought, I took a chance and asked if I could used the credit for the replacement Spark towards a new Mavic Air instead.  Adn to my surprise Outdoorphoto agreed!

So in the first week in February I got the new Mavic Air as a replacement to my lost Spark.  I was expecting it to be almost as frustrating to set up as the Spark was but it went quicker for two reasons.  First I was forewarned and therefore almost knew what to expect in terms of firmware updates for the drone, the remote and the battery and no fly zones.  And the DJI Go4 App was already up to date.  Second, the Mavic Air has a wired connection to the remote controller, which allows the phone to stay connected to the Wifi.  The Spark connected through the Wifi of the phone and therefore any updates had to be done with the mobile network which wasn’t the most convenient.

The wired connection also allows the Air to get further out than I was ever able to get the Spark out.  DJI claims a 2km range for the Spark in perfect conditions.  I was never able to get mine out more than about 120m before losing video signal and shortly after the remote control signal to the drone which gets very scary especially reading of fly offs on the forums. The claim on the Air is 4km, which I haven’t tested but I have been able to get the Air out to more than 1km which allows so much more shooting options than the Spark did and I think is the biggest step up.  The Air also has a better camera and can shoot 4K video so is better than the spark in that respect as well.  In addition to the shooting quality, the camera is also mounted on a 3-axis gimbal which allows steadier video than the Spark did, especially while moving or changing direction.  The Mavic Air is also more powerful than the little spark, capable of faster flight and therefore also better suited for windier conditions.  I found the Spark to be affected by what sometimes felt like the smallest of breezes while the Air is more robust and can be flown in stronger winds without the fear that it will be blown away.

The Mavic Air battery allows about 15 minutes of flight time, up from the 9 minutes of the Spark battery, but about half of the claimed Mavic Pro battery life.  The reason I think is because the Air is much smaller than the Pro and therefore comes with a smaller battery.  The additional flight time allows for additional time to get the shot you are aiming for.  Where with the Spark you had one, maybe two goes at a shot the Air allows more time to try and redo if necessary.  It also allows additional experimentation and i have been steadily learning how to manually do some of the cinematic shots such as orbit and rocket shots that the Air does have but is sometimes better to do manually.  One of the built in shots I have been using a lot of is the panorama function, especially the horizontal and spherical panoramas that take multiple images and allow for epic landscape shots.

Looking out on the Blade river canyon

3 Image Panorama of the lighthouse at Umhlanga Beach 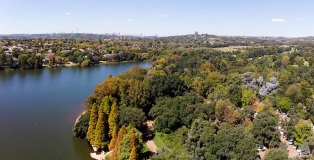 Looking out on Emmerentia Dam

There are however a few issues that I have experienced while using the Mavic Air that I would like to highlight and hopefully will be resolved soon by DJI.  One of my biggest gripes with DJI is on the panoramas mentioned above.  The Air has the ability to create a spherical panorama that consists of from 9 to 11 panels of 3 images each to capture the shot you are aiming for and then are stitched together to give what is best described as a tiny planet shot.  The resulting stitched image is 32MP and creates a terrific effect and adds a new perspective.  The problem is the image cannot be exported from the app currently as the file is too large.  The app exports a large panorama that then needs to reconstituted into a spherical panorama through other 3rd party apps which makes absolutely no sense to me.  Another alternative is stitching all the 33 images together manually before then creating the spherical panorama effect in photoshop which again is a lot of unnecessary work if the DJI app is already capable of doing it.  Below is a sample of a spherical panorama, the left stitched together and photoshopped into a sphere and the right a screenshot of the spherical panorama in the DJI App.  I have had a number of interactions with the guys on the DJI forum and no one seems to offer a more workable solution. 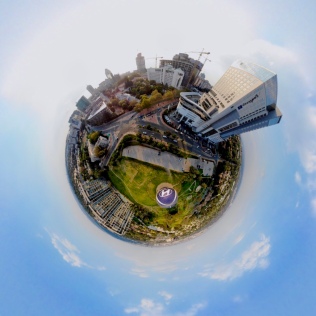 The other issue I have been trying to resolve is the delay in getting batteries and other accessories out to here to South Africa.  DJI announced the Air in January and had the drones out here almost immediately, ready to be bought.  I decided to go for just the drone and not the flymore package as the only additional items were the couple spare batteries, a charger and a bag.  The cost of the two additional batteries would not cover the almost R6000 difference in price between the drone alone and the flymore combo – unlike the Spark the drone comes with the remote standard which is the value of about R3000 already built into the price.   However I have since regretted not getting the combo as actually getting individual batteries has proven impossible with DJI not shipping the batteries until late March and all the stores I have inquired with still waiting for stock.  Unlike the Spark, the Air does not have the ability to be charged using a USB connection so without a spare battery I have been limited to the lifespan of a single battery.  On the recent trip to the Blyde river canyon this proved detrimental as the hour and a half detour resulted in about 18 minutes of flight time and the Air was then grounded for the rest of the day without a spare battery to use as back-up.  Hopefully they will start arriving soon and this problem will be resolved.  Also related to the USB connection, it is rather confounding that the drone has USB 3 connection while the remote has a USB 2 connection which means that the cord provided for charging the remote comes with a tiny adapter that must be removed to connect the drone directly to a PC for image and video download and replaced when the remote needs to be charged.  The adapter I am certain will be lost sooner or later but I guess the saving grace is that using an SD card means that you will not need to connect the drone itself to a PC on a regular basis.

Despite the niggles I have been absolutely enjoying the Air, despite the heartache that brought it to me.  I am looking forward to more adventures and more epic shots with the drone that I think will have legs (or wings) for the next year or so before I need to upgrade – in the mean time I will keep getting more Air-time!