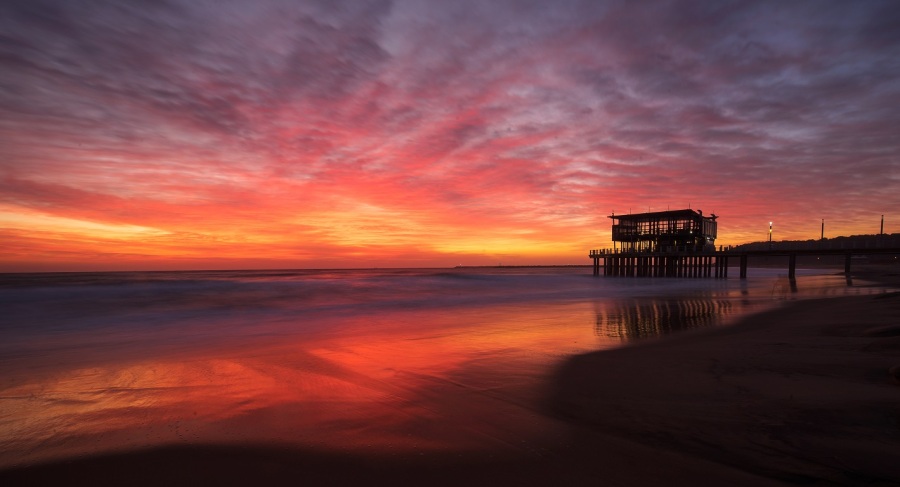 I was reminded of the idiom that says you never know what you have until its gone is one the other day, walking on the Copacabana promenade early one morning with the sun fighting the wispy clouds in trying to come out.  I was grateful that the famous black and white stones on the walkway had been worn smooth by millions of Havaianas walking up and down as they didn’t hurt my bare feet as much.  My shoes had been soaked early when I got caught by a wave I didn’t see coming and I decided to walk back to the hotel some 4km away with them in my hand.  I hadn’t walked anywhere barefoot in ages.  But we used to do it all the time in Durban.  And the main strip in Rio, Copacabana Beach reminded me a lot of the golden mile in Durban.  Only Copacabana is scaled up a little bit and possibly a little more famous.  Durban is however not a 10 and 1/2 flight away.

I lament the fact that I don’t get to travel down to Durbs as much as I once used to.  I have visited what was my home town 2 times in the last 2 and half years, no longer the once a month or so.  And both times I have visited recently I was reminded of 2 things, how beautiful the city of my birth still is and how much it is taken for granted by (most of) the people who live in it. One of the first things I got asked by my cousin was why anyone would wake up at 5am to get out to see the sun rise.  And my response was something about how I need to go get photos of the sun rising and fly my drone because I had been planning the shots I wanted to get for months almost.  The first trip in February was marked by 4 days of wind so drone flying was a no no so I was hoping for more air time.

We got to our AirBnB on South Beach on a cold a rainy Thursday afternoon which was also Womens Day.  It didn’t bode well for drone flying.  The holiday also meant that the beachfront was busy and the noise kept us up until much later than we needed to.  Luckily Friday turned out to be wet and windy again so we could sleep in.  Also lucky for us, the Thursday holiday was the only busy night at the beachfront so Saturday morning was a good and early start.  Turned out to be a washed out sunrise though so it was a little effort wasted to get out to the rocks under the Umhlanga lighthouse.  But all the rain and wind did clear up the skies over the Durban CBD to allow a cool shot on the way back from Umhlanga.

Sunday yielded the best results for me.  I planned a shot of the Moyo pier on south beach to use as my phone lock screen.  Knew how I wanted to position the pier and try and get the waves in.  The early thin clouds helped provide some quite even light and I got exactly the shot I wanted and as a bonus I also got a more abstract shot of myself, two canoeist and the lifeguard station.  I submitted the photo of the pier to a the Getaway monthly photo competition and it got selected a one of the top 10 for December.  And as much as I take that as an awesome accolade, seeing that image that took all the planning and was in the end exactly what I set out to do even before I had left Johannesburg on my phone everyday is and even stronger reminder for myself. 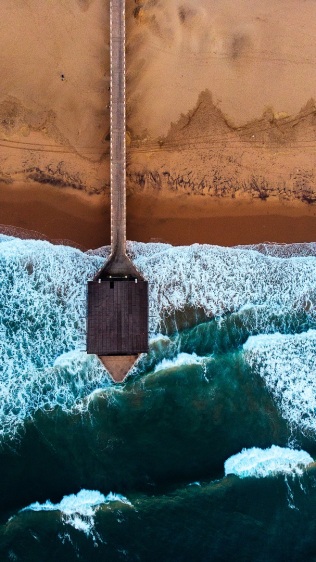 But that still doesn’t fully explain the 5am start I guess.  Along with the droning I also had a new camera to play with.  The best shots in Durban I have shot have not been of the sun rise itself but actually in the rapidly changing light in the 20 to 30 minutes before the sun breaks the horizon.  The sky can go from purple to pink or deep orange and then lighten as the sun comes up.  And with the sun rising at just after 6am even in August it would mean getting up and ready and on the beach by at least 5:30am and hope there isn’t too much cloud or too little cloud or clouds in the wrong spot to see the show unfold. 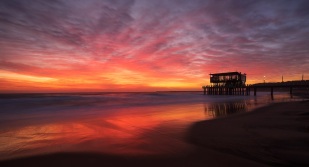 Every sunrise is different so almost more than taking photos, being out there watching the sun come up on a new day is a reward in itself.  I watch the sun rise plenty here in Joburg, being a runner means early mornings before work maybe 3 or 4 times a week.  Out in the bush as well, the best light is the soft golden hour light in the 40 to 60 minutes after the suns up.  I have seen the sun rise over the ocean maybe 8 times in the last 30 months.  Over the Indian ocean in my home town perhaps 5.  And yet I can tell you that’s more than a few of the local residents.  I asked my cousin when last he had seen the sun come up over the ocean he couldn’t remember.

I woke up at 4am in Rio to go out and watched the sun rise over the Atlantic Ocean.  Got ready, walked to the main beach road, caught a taxi to the fort that separates Copacabana and Ipanema beaches and set my tripod up and tried to take it all in.  The sunrise turned out to be washed out again, like the one morning in Durban recently and it reminded me how lucky I was to have lived in Durban because I could probably have gone out again the next day and tried again.  Having to check out and fly back to SA the next meant I couldn’t do the same in Rio.  And in that moment I missed my home town possibly more than I have ever missed it before.

There are ways not to miss home.  The first is to never leave.  But you will never full appreciate what you have if you do that.  Or you can run.  Leave and travel and take in as much of the big world as you can to the point that you call many different places home.  Perhaps the last is to take a little bit of home with you everywhere you go.  I moved up to Joburg 13 years ago, but somehow Durban will always be called, and indeed, remain home.