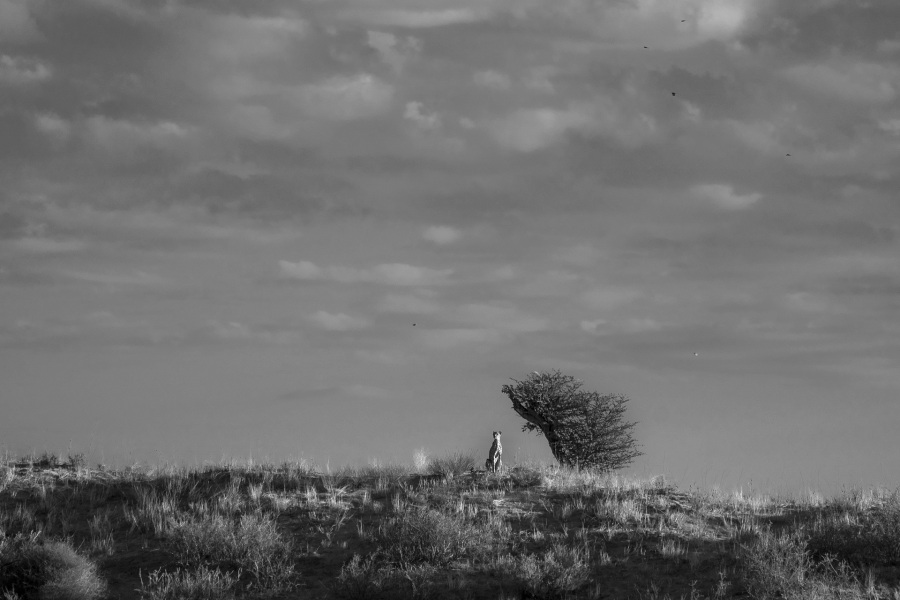 That time I fell in love between two river beds….

The first reaction I get from most of the people I told my December holidays were spent visiting the Kgalagadi Transfrontier National Park (KTP for further reference) was “Where’s that?”.  My response for ease of reference was “Near Upington, on the border of Botswana and Namibia – that pointy sticking out bit.”  Still most would only recognise it slightly better.  The most common response I got as a follow up was “It’s hot there!” For good reason though.  Most South Africans my age are most likely to recognise Upington, from the daily weather reports our parents forced us to watch growing up, as one of the hottest places in the country almost through all the seasons.  Durban would be setting record highs at 36 degrees Celsius and Upington would be “Hold my beer” at 45 degrees. Upington, Lephalale and Skukuza would always be closer to the sun than the rest of South Africa.  So maybe visiting at the height of summer was madness.  But it was madness I had set in motion 3 years before and has to see through.

At the turn of the year in 2016 I set out to do two things.  The first was a big year of birding where I would try to discover as many Southern African birds as possible.  By the end of the year I had got to about 230 different species, most of them new to me.  The tally now sits closer to 280 but I will need to double check.  The second was to visit all the SanParks administered  national parks in South Africa in 3 years. There are 19 if you count the Garden Route National Park as a single park but 21 if you count the 3 separate sections of the Garden Route National Park individually.  So in 3 years this would mean visiting roughly 7 parks a year, every year.  Easy enough I thought.  By the end of 2017 I had done all but 6 parks.  The last 6 however were going to be tough as 4 of them were on the extremities of the country.  In April, I got a chance to make a quick trip to Mapangubwe, on the border of South Africa, Botswana and Zimbabwe. Only 5 to go! And then I got busy and very soon it was September and I had not even booked anything…

So I then tried to pull something together with my friend Prasheen. But the last minute planning and tight dates meant I was travelling alone. Again. I managed to find 4 nights of viable accommodation within the park – that was all that was left!. Arriving at Twee Rivieren, I would stay a night then head off to Mata Mata spend another night before changing camp again to Nossob for two more nights. I checked the driving routes and realised that a 10 hour drive to get to the park would mean a day lost so at the last minute added an extra night camping, This turned out to be a good decision as it allowed me to leave Johannesburg later and the drive then took around 11 and a half hours because I stopped a couple times including once to catch the rain falling over the desert with the drone.

I arrived at Twee Rivieren and had hardly set up my tent before I saw a car stop and look up at a Verreaux’s Eagle Owl who had come to rest on one of the dead trees on the camp’s edge. He must have been a lucky owl for the rest of the trip was filled with wonderful sightings that made me wish I had booked even more nights in the park. If they had been available that is. The park was full to capacity, and yet, at no point did it feel crowded. Unlike the Kruger where roadblocks are common place, the most traffic was perhaps 6 cars around a lion sighting. Driving up from Twee Rivieren to Mata Mata I kept in close contact with two older ladies and for many of the remaining days I would see them at the different sightings or in passing and we would share what we had seen.

The first day at Twee Rivieren left me in awe. Without even seeing any big cats. A brown hyena drinking water, jackals, springbok, gemsbok, two species of owl and ground squirrels playing in the camp. The drive up to Mata Mata was quiet almost all the way to the camp. Then as I came around a corner before the last waterhole I was flagged down. Cheetahs! 4 of them together under the tree. It was 11 o clock and the temperature was already touching 40 degrees so I decided the cheetahs were not going anywhere. I went to the camp, checked in, had lunch and refueled before returning around 3 o clock. It was closer to 44 degrees in the sun by then and so began what turned out to be a more than 3 hour vigil in vain. The cheetahs never moved closer. Every 20 minutes or so they would get up, purr at each other and then re-position themselves with the shifting shade of the tree they were under and go back to sleep. There were actually 5 of them together, but they stayed together under the tree the whole time.

The camp itself at Mata Mata wasn’t too bad. The chalets were a bit dated and the aircon did not work that well but it wasn’t sleeping in a hot tent so I survived. There was a waterhole and hide at the camp but there didn’t seem to be much activity going on. If I had more time I would have definitely sat at the hide for longer into the night. There were no guided drives the night I stayed which was unfortunate. I was up and on the road at the crack of dawn again the next morning, driving across the dunes to Nossob. From Twee Rivieren to Mata Mata is marked as 189km and estimated to take close to 4 hours to drive. In reality it took closer to 5 and a half hours, stopping along the way for photos and at the one picnic spot to use the bathroom. From Mata Mata to Nossob is shorter in terms of distance at about 166km but the road over the dunes was really bad in some places. The drive took almost 5 and a half hours as well, even though there were fewer stops for photos. I did have one close up cheetah sighting of a mother and her two cubs, following them for almost 20 minutes before they decided to rest under some shade in the river bed.

My arrival at Nossob was a little bit too early to get into my chalet so I was sent back out, Good thing too as I got to spend some time on a Gabar Goshawk sighting before spotting a pair of mating lions at the Marie se gat (the name of this waterhole had me smirking every time I said it) waterhole. Again the midday heat was in the blistering 40degree celcius range so I went in for lunch and returned to another vigil in the afternoon sun. The mating lions moved onto the road though and gave us a good show before I returned to camp to go on the afternoon drive that was both informative and refreshing after hours behind the wheel. First sighting of both the Cape fox and Bat eared foxes and two more owl species.

While on the drive I spoke to some of the other guests who had driven in from the north of the camp and when I asked about Bateleur sightings I was immediately directed to the Cubitjie Quap waterhole and told to wait for midday when 6 to a dozen Bateleurs will descend to have a drink. It sounded like a prophecy more than sighting tip but I decided go north of Nossob and see what I could find and hopefully see the Bateleurs on the way back to camp. I got as far as Polentswa and got scared the trip all the way to Lijersdraai might cause me to miss the Bateleurs after spending almost 45 minutes with a pair of spotted hyena and their black backed jackal buddies feasting on an eland carcass. So I turned around headed back which turned out to be a minor miscalculation as the only bathrooms were at Lijersdraai so sitting and waiting at Cubitjie I had to pee real bad! At 10 o clock. And the Bateleurs wouldn’t land for a while so it was a fidgety wait to say the least. They did come though, and a little bit early at that. I saw 3 juveniles and one beautiful adult. My trip was made! As an added bonus I managed to get some sweet group shots (considering the midday light) of the normally solitary Secretary birds as they also came in to drink. Later, on the evening drive we saw lions in the twilight after the sun had set. A large magnificent male keeping a pair of females with their cubs company. I hesitated before taking the pictures knowing that I would be underexposed. Some editing and the dynamic range of the Sony actually made the pictures quite usable in the end! I was sitting directly behind the ranger and said under my breath that all I needed to see was an African Wild Cat and I would be over the moon. Not even 5 minutes later I saw the flash of predator eyes looking back at me as I swept the floodlight across the low Kgalagadi thickets. There sitting on her haunches was a little African wildcat, stalking an early evening meal!

The dawn of the last morning came with a heavy heart. Leaving the park, even after such a short sojourn felt like I was leaving a big part of me behind. I had a long drive to get out from Nossob to Twee Rivieren, more than 5 hours of solid driving at 50km per hour. And then another 250km to get to Upington, and 500km to get to my overnight stay in Kimberly. The park however was not letting me go so easily. Not 200m out of the Nossob gate I came across a Cape Fox den, with the master of the house sitting at his doorway. 3 more lions at Marie se Gat, an older male lion who had a run in with a porcupine, adult bat eared foxes returning to their den to rest out the day and then two young majestic male lions at the Kij Kij waterhole. I almost felt they had learned about the lion king pose and replicated it. I eventually did manage to make my way to the Twee Rivieren camp, grabbed an egg and cheese sandwich (my new favourite) and was off on the long journey back.

I spent my last night at the Mokala National park, just outside Kimberly. The park is home to roan antelope but I did not get a sight of the rare species. I did visit the big hole in Kimberly for the first time on the way out and was brought to tears by the back story of what was a town in the middle of nowhere that had such a big part to play in South African history. The stop at Mokala meant that I managed to add another park to the list that I had set out to complete at the beginning of 2016. I did 3 parks of the 6 remaining on my list at the beginning of 2018, while Augrabies, Namaqua and AI AI Richterveld remain to be visited. I will try my best to get out to them, if I can get the timing correct. But 18 out of 21 isn’t too bad. Now on to the next challenge – studying towards my field guide qualification, hopefully to get my level 2 qualification before the year is out!